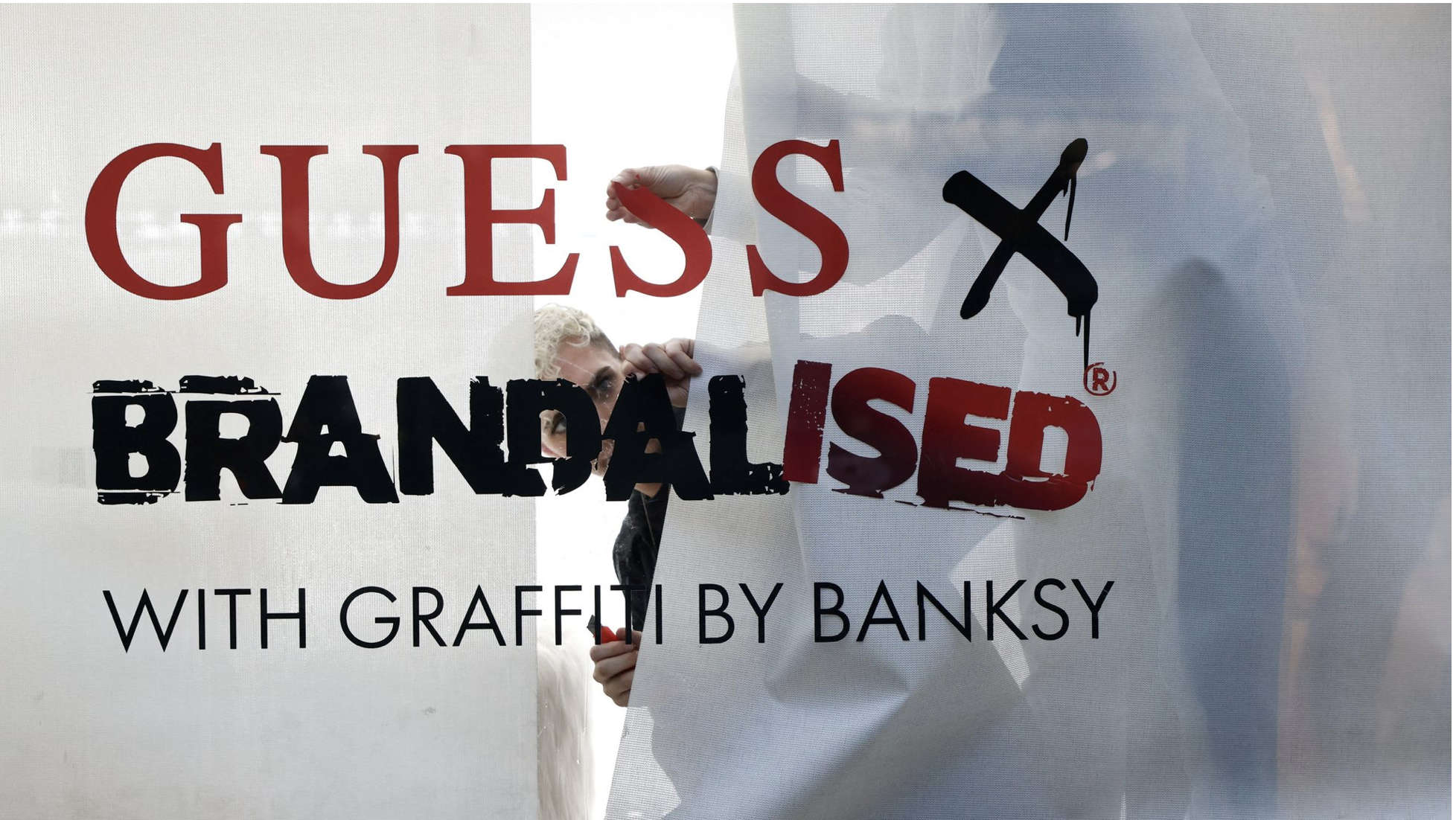 Following Banksy’s post, shop staff covered the inside of the window with large sheets of plain paper, obscuring the display

Banksy has accused US fashion retailer Guess of stealing his work, encouraging shoplifters to head to their flagship Regent Street store in central London and "help themselves" to the clothes.

The anonymous graffiti artist shared an image of the shop's front window with his 11.6 million Instagram followers, showing items of the capsule collection inspired by his work.

He wrote above the image: "Attention all shoplifters. Please go to GUESS on Regent Street. They've helped themselves to my artwork without asking, how can it be wrong for you to do the same to their clothes?" 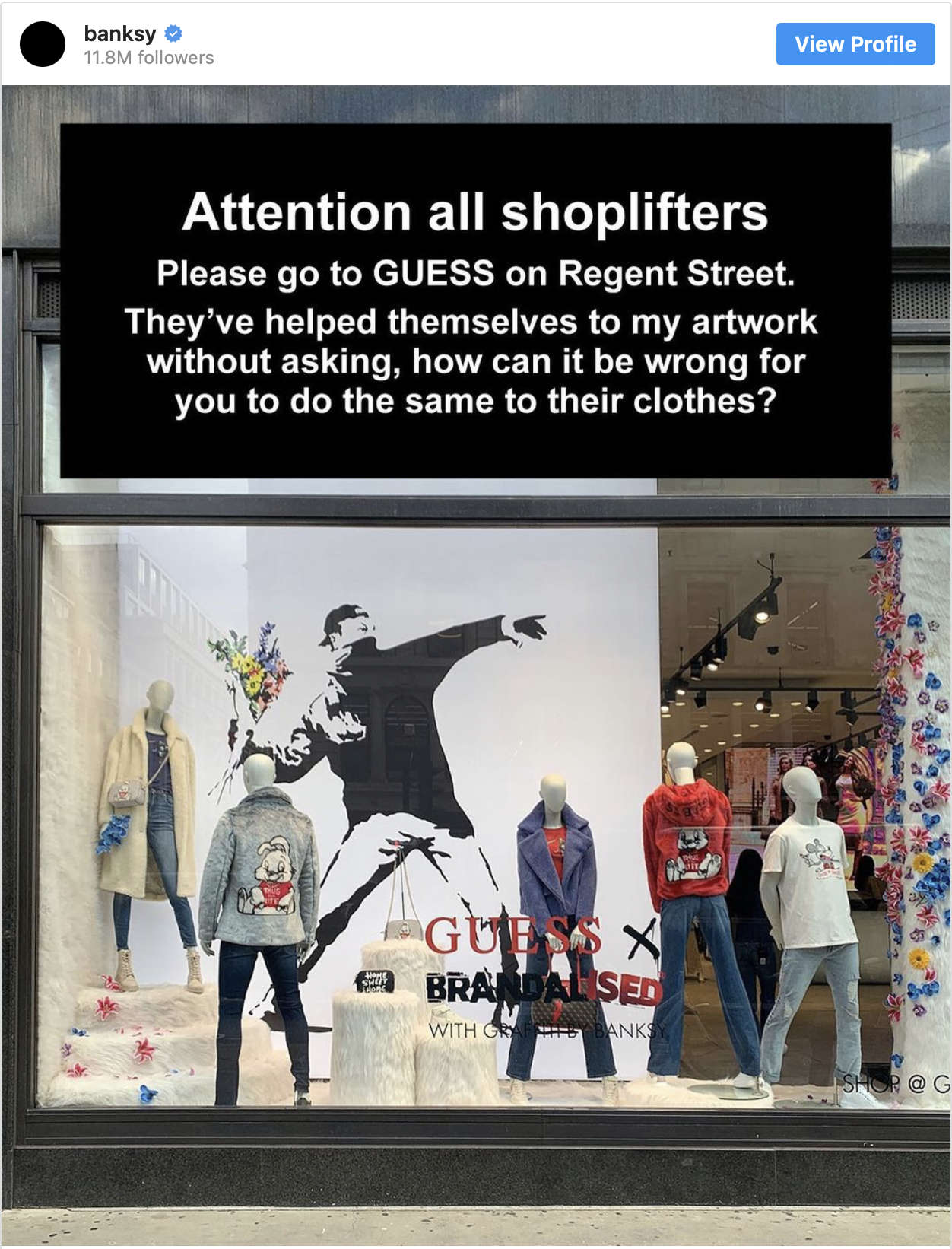 Behind the mannequins wearing T-shirts, coats and accessories featuring his graffiti, there was a large background image of his Flower Thrower stencil, showing a masked Palestinian throwing a bouquet of flowers.

The Guess website promoting the collection says the clothes were "created in partnership with Brandalised", a company that secures the rights to graffiti all over the world, which their website says offers fans the chance to buy "affordable graffiti collectibles".

They have shops in both the UK and US, and feature lots of Banksy's work, predominantly on their site and Instagram page.

They also quoted Banksy saying he was previously "a bootlegger" and quoted him as saying that asking for permission to use something shared in a public space was like "asking to keep a rock someone just threw at your head".

'A way for fashion to show its gratitude'

In a statement before the clothing launch, Paul Marciano, the chief creative officer of Guess, said: "The graffiti of Bansky has had a phenomenal influence that resonates throughout popular culture. This new capsule collection with Brandalised is a way for fashion to show its gratitude."

The collection has items for men, women and children, and uses Banksy images including the Queen with a blue and red David Bowie-style lightning flash painted across her face, his Livin' The Dream Disney take down and Thug For Life Bunny. Prices range from around £35 up to around £225. 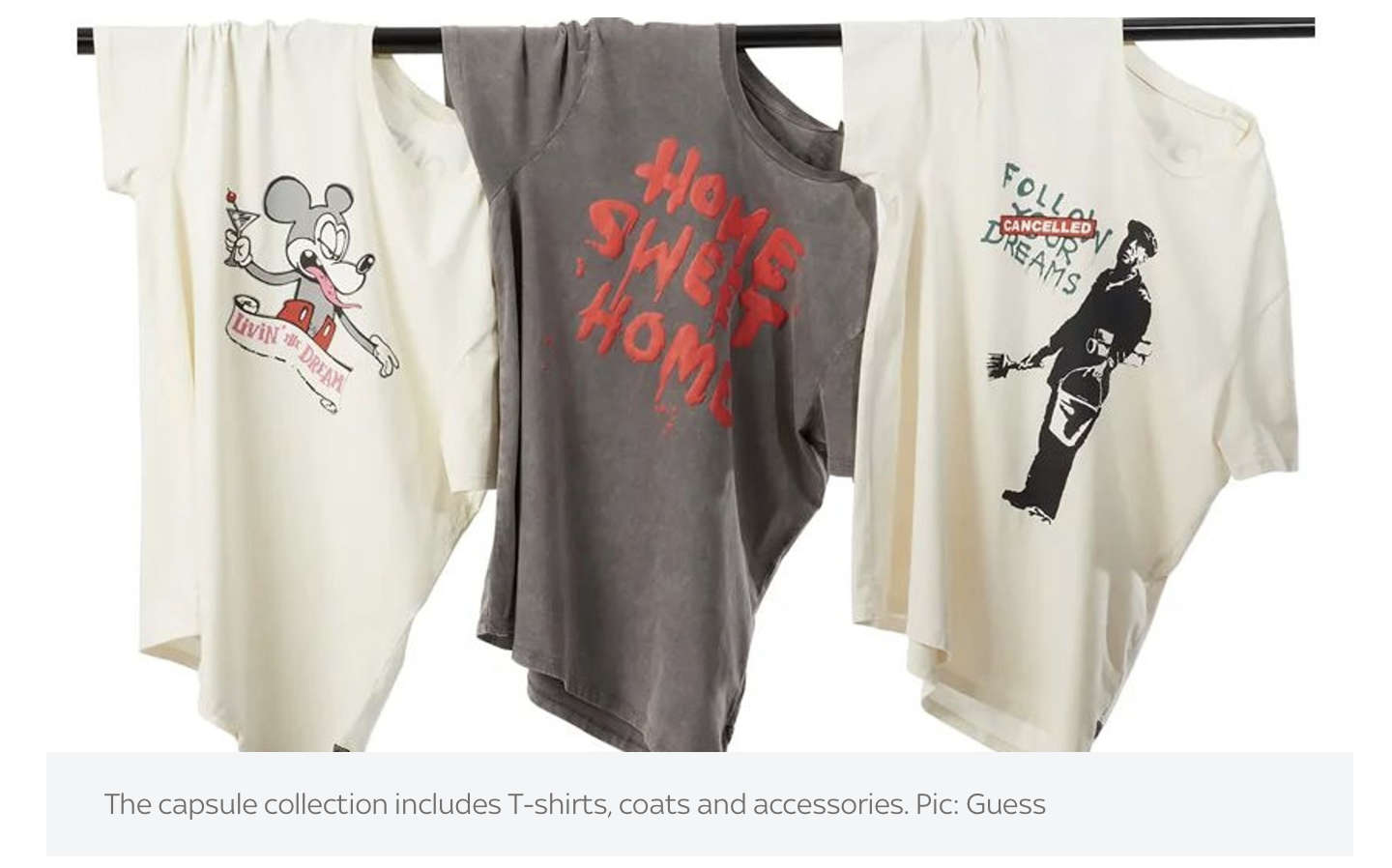 After Banksy's post, shop staff covered the inside of the window with large sheets of plain paper, obscuring the display.

Copyright infringement is normally a civil offence, whereas shoplifting is a criminal offence. But what's the expert take on the situation?

"If Brandalised don't have permission to sublicense the artwork then Banksy will have to claim against both Brandalised and Guess for copyright infringement.

"The problem is that to do that it is highly likely that he will have to waive his anonymous status in court proceedings. After all his identity isn't a state secret - just a marketing ploy!

"If Banksy has permitted the use of his artwork on clothing, then perhaps the outrage he is putting out there is some kind of guerrilla marketing campaign - or possibly just annoyance at the fact that they aren't getting a cut of the action they think they deserve. Until further information is disclosed, then we really aren't going to know any more. The enigma continues!"

Sky News has contacted Banksy, Brandalised and Guess for comment.

Earlier this week, Banksy won an appeal to allow him to keep the trademark of one of his most famous images, a sandwich board-wearing monkey, at the EU Intellectual Property Office.

The artist also appeared to confirm he was in Ukraine, having last week unveiled works in the Ukrainian town of Borodyanka, northwest of Kyiv, which has been heavily damaged by fighting following Russia's invasion.

He shared an image of a female gymnast balancing on the corner of a destroyed block of flats on his Instagram account, and two other murals were reportedly seen nearby - one depicting a man resembling Russian President Vladimir Putin being flipped during a judo match with a little boy, and another showing two children using a metal tank trap as a seesaw.