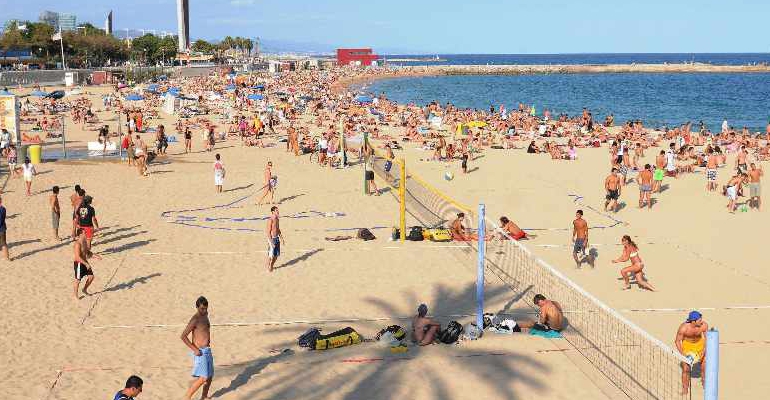 A general view of Platja Nova Icarie beach in Barcelona

The holiday hotspot might just be back on the menu.

It’s the news sun-seekers were waiting for: Spain’s tourism minister has stated the country will start accepting tourists, Brits included, from June.

Two months is a long time in Covid-land but if the stars align we might just be back in Barcelona and Benidorm sooner rather than later. And there are a few things you can pretty much guarantee when you land…

1. There will be sun. That is assuming you don’t wait nine months, and manage to avoid the 300-odd days of sun the country enjoys each year. It’s practically obligatory to don a silly sunhat you would never wear at home.

2. You will be able to understand some of the language. Sporty types will have a particularly easy time, choosing from golf, tenis, and basquetbol. Let’s hope you don’t end up in el hospital with un problema though.

3. You can learn a lot of the rest. Ranked the world’s easiest major language for English speakers by almost everybody, a few weeks on Duolingo and you’ll likely be able to master even big words like epidemiologia.

4. There will be other Brits. There were more than 18 million in 2019, to be exact, many experiencing extreme sunburn in the resorts of the Costa del Sol.

5. You will eat vast quantities of tapas. Tapas is as integral to the restaurants of Madrid as it is the wine bars of New York. And it’s great.

6. You will get sleepy because everything starts late. A short break might not be long enough for you to fully embrace the siesta, but you can certainly enjoy the flipside – that Spanish evenings regularly start late and reach into the early hours.

7. You’ll have to compromise to avoid crowds. Slightly uncomfortable stony beach, or a square foot of sand you had to fight for tooth and nail? You could go and see the Sagrada Familia… if you’re willing to queue for hours.

8. The architecture is incredible. From dreamy hilltop farmhouses to the soaring spires of Seville, at any level Spanish masonry is gorgeous and distinct.

9. The alcohol is too tasty. Sangria is dangerous. A summery cocktail that tastes like sugared fruit juice and can be sold off the shelf at 12%. Have fun in the morning.

11. The flights are pretty quick. At around two-and-a-half to three hours, depending on your airport of choice, trips to Spain are so speedy you needn’t stomach so much as a mouthful of plane food.

12. You will have options. From skiing in the Pyrenees to surfing in Marbella, from southern Moorish fortresses to the ultra-modern Guggenheim museum in Bilbao.

13. You will consider retiring there. It’s such a trope. There’s a reason for that.