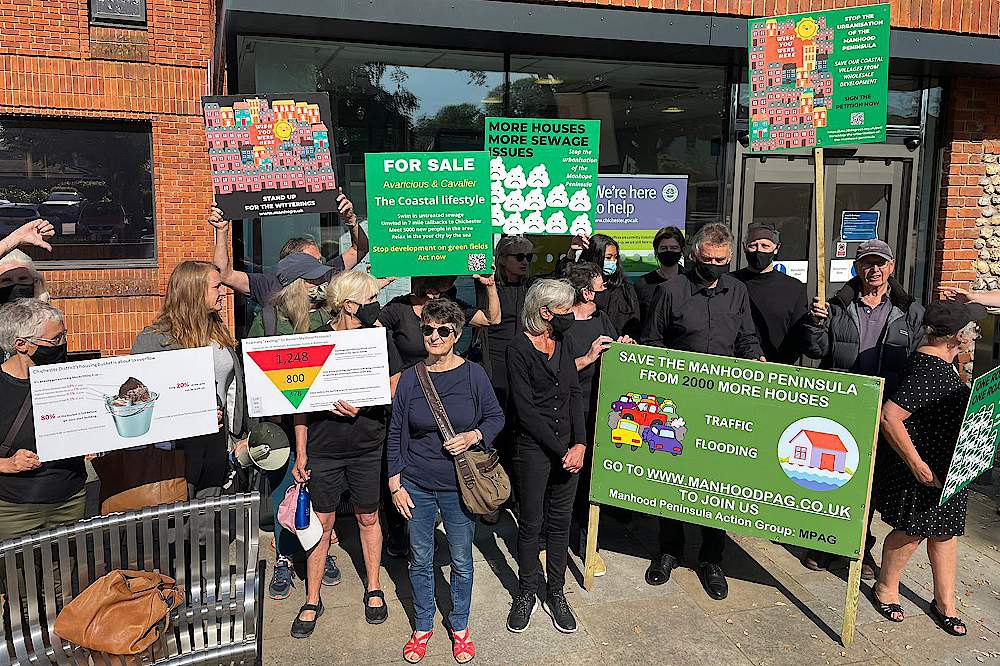 “A win for the people of the Manhood Peninsula – fantastic!” was the cheerful cry from one woman following the vote during a meeting of the planning committee on Wednesday (June 9).

Councillors arrived at East Pallant House to be greeted by protesters opposing the application for land west of Church Road.

"“Every councillor in the chamber today will make a decision which will affect the future generations and the future of the environment on the Manhood Peninsula.

“They should take that responsibility very, very seriously.

“It’s not for us today but it’s for future generations.”

No one could accuse the committee of not taking things seriously as the discussion which followed stretched on for a couple of hours.

The application was eventually refused by nine votes to two on the grounds that the development was unsustainable, would have an adverse impact on the landscape and was of an ‘inappropriate density’ to have on the edge of a village.

Flooding and rising sea levels were among the many points of concern raised during the meeting, leading to some impassioned comments from members.

“In my view it is actually morally offensive to entice house buyers to put their life savings into property which will become worthless and in fact uninsurable in about 50 years – and in 100 years will be subject to regular flooding.”

Donna Johnson (Local Alliance, Sidlesham & Selsey North) suggested the council should look into the number of small applications it had received and expected to receive in the near future.

“When we we view them individually, it might be considered that they have little impact.

"But when we view them together, they represent a really significant cumulative impact.

“What we appear to be doing at the moment is allowing piecemeal development which, when viewed as a whole, has a severely detrimental impact on the existing community.”

The call to refuse the application came from Graeme Barrett, whose lengthy speech about the ‘inadequacies’ of the water and sewerage systems serving the peninsula earned him a round of applause from the public gallery.

After the meeting, the Manhood Peninsula Action Group (MPAG) and Stand Up 4 Chichester said they were ‘delighted’ that the application had been refused.

“We are much reassured to hear the councillors raising a series of concerns which are causing real concerns with the residents of the Manhood Peninsula.

“Issues such as very poor road and sewage infrastructure traffic problems are sadly something that residents on the Manhood live with daily.

“However, the really big issue is the ambiguity over the sea level rise figures and the use of out-of-date modelling figures which is causing even bigger worries.

“We wholeheartedly endorse the comment made by one councillor when he declared that it is immoral to sell new houses, which people use their life savings to buy, if they could be flooded in 50 years.

“That is a sentiment of so many on the Manhood Peninsula.”

Mrs Foster sent the groups’ thanks to councillors who ‘stood up to be counted’.

She added that campaigners wanted the council to ‘call for a pause in any new development applications’ until it and the Environment Agency had a new flood model in place.