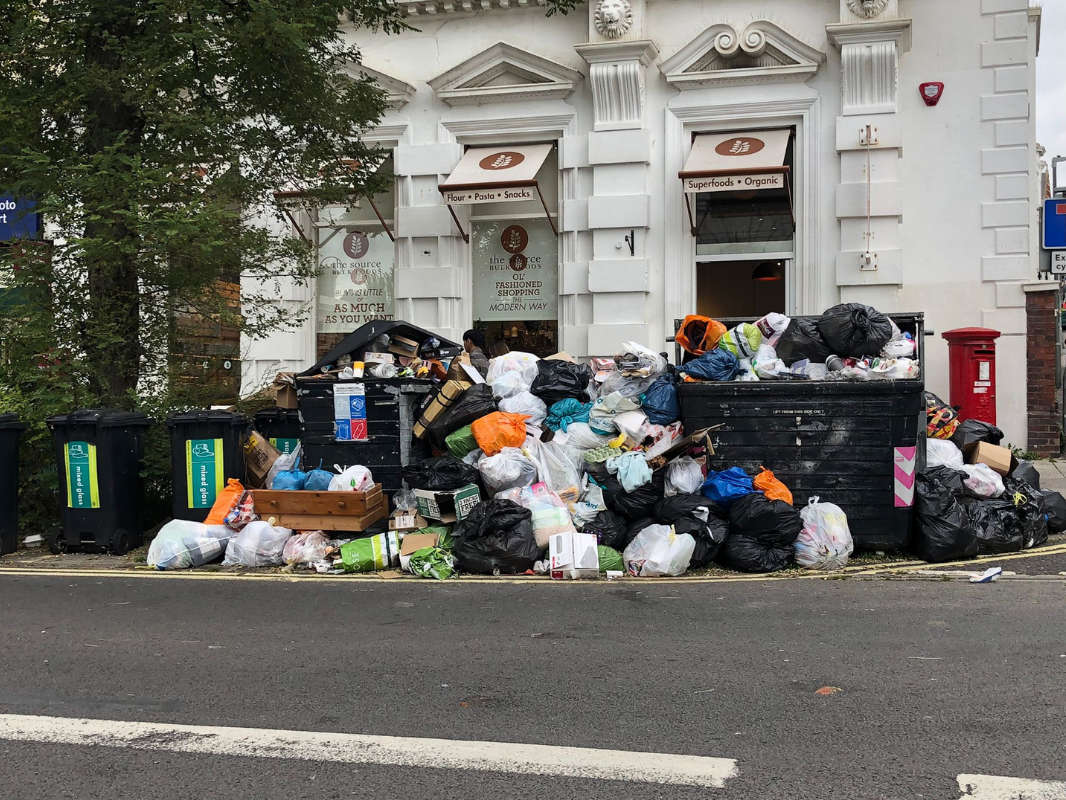 Strike action was likened to terrorism as a councillor accused the bin lorry drivers’ union, the GMB, of “holding the city over a barrel”.

Conservative councillor Joe Miller made the comments during a six-hour meeting today (Wednesday 13 October) as leading councillors agreed how Brighton and Hove City Council would attempt to resolve the bin lorry drivers’ strike which has left rubbish piled high.

Councillor Miller’s comments courted controversy even though he said that he had sympathy for the drivers’ grievances with management that were the substance of the original ballot before pay became part of the equation.

“Ultimately in my view, the GMB are holding a gun to our head.

“They’ve got us over a barrel. It’s blackmail. It’s a bit of a shit show the entire thing. I’ve never known anything quite like it.”

“This is a similar situation to ‘you can’t negotiate with terrorists’. The actions of the GMB are not those of terrorists, obviously, but what they are doing is they are refusing to work.

“They have inflamed an issue from one I was sympathetic to, to throwing pain at the last minute, which is going to cost a significant amount of council taxpayers’ money.

After Councillor Mac Cafferty asked Councillor Miller to modify his language, he said that the pay demands were unreasonable without cutting other council services and a hard line needed to be taken.

The four Labour councillors at the special meeting of the council’s Policy and Resources Committee, committee were quick to condemn Councillor Miller’s comments and declare that they were not terrorists despite being GMB members themselves.

Labour councillor Nancy Platts, a former leader of the council, shared comments from drivers, having spoken with them on the picket line at the depot in Hollingdean to hear their grievances.

She said that the workers were among the lowest paid in the city, with many earning a basic wage of £21,000, rising to £28,000 with overtime.

When she led the council, industrial relations were under strain, she told the meeting at Hove Town Hall, but she brought in an independent negotiator who found the middle ground.

“This has been going on for eight days. It’s been in the papers what this dispute is about.

“This is a crack at ‘toughing it out’, rather than resolving the dispute, which was the advice given to me at one point when I was council leader.”

She said that bin drivers had told her that managers were not treating them with respect, instead speaking to them “like dirt or something on the bottom of a manager’s shoe”.

She said that drivers wanted to complete their rounds and had a tremendous sense of frustration when they could not do so but they did not have the tools they needed to do the job.

The reasons why drivers did not complete their rounds included

Labour councillors called for the negotiating team to seek a dispensation so that rubbish could be collected from bin stores in flats where they were a fire hazard.

They also asked for a third party to join the negotiating teams to resolve the dispute.

Labour’s co-leader, Councillor John Allcock, said that the council should have brought in the conciliation and arbitration service ACAS or an independent industrial relations expert to help before the dispute descended into industrial action.

He also asked why the negotiating team had not found a way to remove rubbish from bin stores in tower blocks.

Residents expected answers, he said, as they were suffering.

“What’s disappointing is that there are really no excuses for that failure either, considering the last Labour administration left you with a clear example of how to resolve a complex Cityclean dispute without seeing residents exposed to industrial action.

“Is the institutional memory of the senior management team so short that those lessons have already been forgotten?”

At the end of the six-hour meeting, with more than three hours in confidential session, the Green and Labour members voted to

The decision will go before a meeting of the full council next week, on Thursday 21 October, at Councillor Miller’s request.