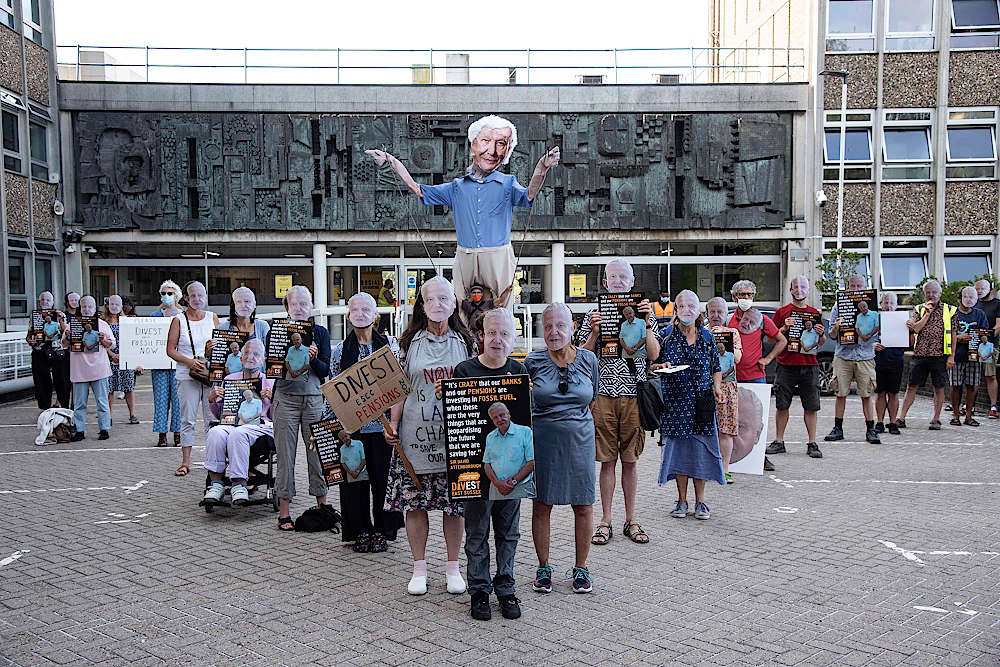 Calls to set an earlier target date on carbon neutrality have been voted down by East Sussex county councillors, after campaigners called for pension funds to be divested from fossil-fuel providers.

At a full council meeting on Friday (July 23), East Sussex County Council considered a motion calling on the authority to bring forward its carbon neutral target date to 2030.

The motion, from Liberal Democrat group leader David Tutt, comes almost two years after a previous motion, in October 2019, saw the council declare a climate emergency and set a target date of ‘as soon as possible, but no later than 2050’.

“The level of change depends upon how quickly we cut emissions of those dangerous greenhouse gases.

“It is not something we can wait 30 years to deal with and it would be irresponsible of us to sit back and say ‘well, we said there was an emergency and we took some measures towards it! We did our bit, but we waited until 2050 until we had completed those’.

“The International Panel of Climate Change, if anybody wants to Google that they will see the difference between a 1.5°C and a 2°C change.

"Put some money, put some resources behind this notice of motion and do our bit on behalf of not only the residents of East Sussex, but the residents of the world in addressing what is probably the most serious issue that this planet faces.”

"We were one of the first to sign the Nottingham agreement.

"We have a plan to achieve [carbon neutrality] by 2050 or as soon as practical.

“I just turn to Cllr Tutt and say let’s look at your plan.

"I was at a meeting on Tuesday of this week where the director of environment was outlining the issues about carbon reduction in the transport field.

"Your councillor from Eastbourne said ‘I’m going to have to go back and ask some questions because we don’t know what is going on in Eastbourne’.

“So to come along here and give us all this claptrap about how important it is, is just shroud-waving.

"This council has a plan. We’ve identified it. It will be delivered.”

This early exchange set the tone for much of the following debate, with frustration showing on both sides of the argument.

By-and-large Conservative councillors argued in favour of keeping the existing target date and reduction plan, saying a 2030 target was unfeasible and challenging supporters to provide details of their plans to reach it.

However, Lib Dem and Green councillors argued the scale of the problem demanded faster action.

The Labour group – which had co-signed the motion containing the original target date – did not vote unanimously for or against the motion.

Among those to argue in support was the Green Party’s Julia Hilton, who said:

"“I would just like to remind people that around 18 months ago we didn’t know we were going to be dealing with Covid-19.

"We were all going along with our lives quite happily and suddenly we’ve had to make radical changes.

“We’ve had to put millions of pounds into a vaccination scheme, which luckily in this country is helping to solve the problem.

"We moved fast as a country to try and come up with changes because we had to do it.

“This is what we are talking about by moving the goal to 2030.

"It’s about upping our ambition, it’s not about going ‘oh, we have to make priorities’.”

Debate on the motion continued for some time, but it was ultimately defeated on a majority vote.

“Colleagues I think what we have got before us amounts to a change of date, not of substance.

“No one disputes the examples that Cllr Tutt has given of the consequences of climate change across the world.

"Indeed those sorts of events are some of the motivators for us doing this work and having done this work for some time.

“We have little ability to influence what happens across the world in the next 100 months, but it is a false premise to start that our target, agreed with the Labour Party, is 2050.

“What we do have is a plan, with other authorities look to as an exemplar, which will be reviewed annually and is also supported by a professional board of partners who will be reporting to us later in the year.”

Before the meeting, a demonstration was held outside county hall by members of the campaign group Divest East Sussex.

Described as a mass ‘Attenborough-in’, the demonstration saw dozens of members of the public display a fourteen-foot tall puppet of Sir David Attenborough as councillors entered the building.

It came as part of the group’s long-running campaign calling on the East Sussex Pension Fund (which is administered by the county council) to withdraw its investments from the oil and gas industry.

“Divesting the East Sussex Pension Fund from fossil fuel companies would send a powerful signal to policymakers about the need to finally get serious about tackling the climate emergency, which requires the rapid phasing out of fossil fuels.”