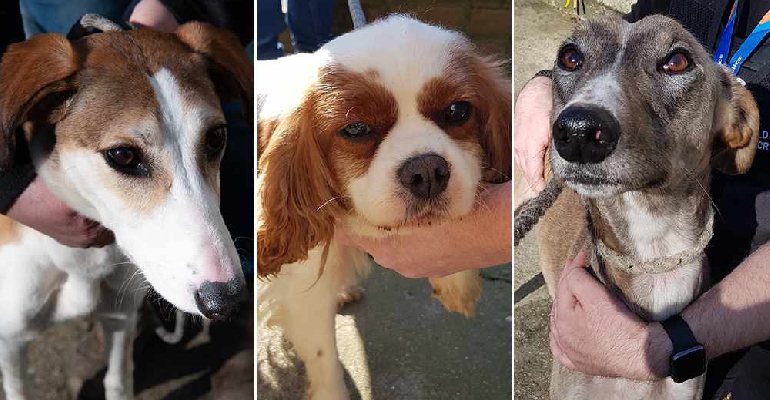 More images of suspected stolen dogs have been released by Sussex Police.

As previously reported by More Radio, officers seized the animals in Surrey last month in a bid to identify them and reunite them with their lawful owners.

Officers seized 10 dogs during a search warrant at a location in Surrey on 16 March.

Detectives in Crawley have been working closely with the Force’s specialist Rural Crime Team and other police forces, to help identify the dogs and their lawful owners.

The dogs, a mix of Lurchers and Spaniels, continue to be cared for at a secure location.

Two-year-old Cocker Spaniel Willow, who was one of the dogs seized, was successfully reunited with her owners last month. She had been stolen during a burglarly in Suffolk in July 2020.

“We are desperately seeking the lawful owners of the remaining dogs which were seized in the recent warrant.

"We are working through all information meticulously and pursuing other lines of enquiry to progress the identification of these dogs. This is a complex investigation and we suspect that some of the dogs may have been stolen months ago.

"We appreciate this has been an agonising time for those members of the public with missing pets who have been waiting for further information.

"However we have now released more detailed photos of the dogs in a bid to try and identify them and return them to their rightful owners. The dogs have each been given a name for the purpose of the investigation.

"If you recognise one of these dogs, please email  [email protected] quoting the name of the dog you recognise. The email address is the fastest way to contact us and we have a dedicated team managing this.

"While we continue to progress enquiries on identification, our priority continues to be around the health and welfare of the dogs and medical treatment is ongoing."

The location of the site is not being disclosed for operational reasons.