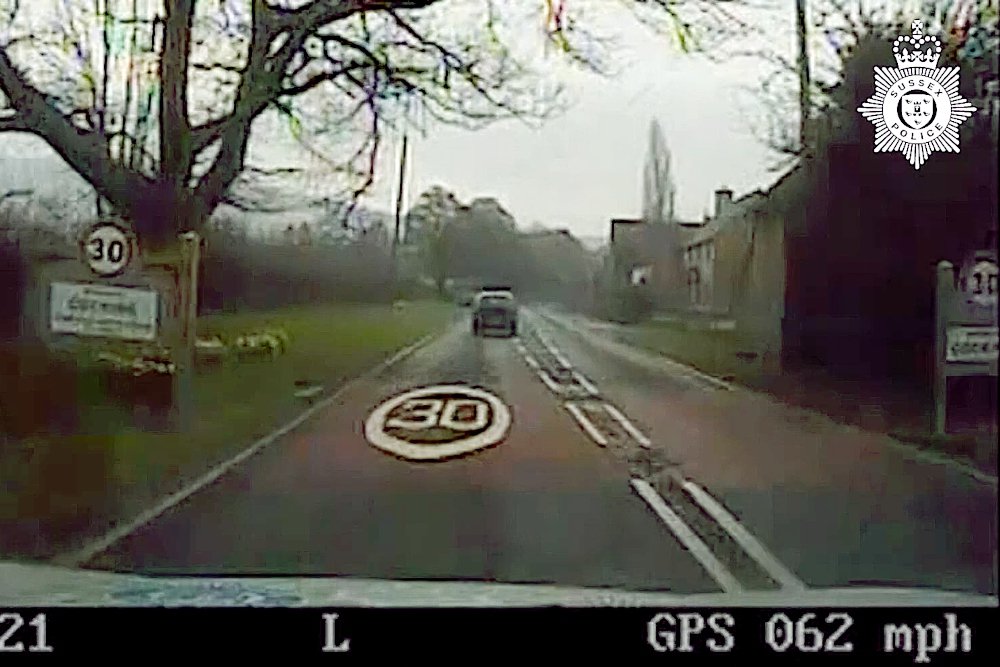 Watch what happened when an 18-year-old provisional licence holder, with a 17-year-old girl as a passenger, led police on a chase along busy single-carriageway roads in West Sussex — sometimes at twice the speed limit.

Now, Kieran Morgan, 18, has been convicted in court after, according to police, "risking the lives of numerous road users" as he drove through Midhurst and other nearby settlements.

Police said officers were on patrol on the A286 about 12.45pm on 3 March when they spotted a Toyota Yaris registered to an unlicensed driver.

They signalled for it to stop, but the driver continued on his journey, overtaking into the path of oncoming traffic, including on the approach to bends and crossing solid double white lines, which is also illegal.

The driver reached speeds around 60mph in a 30mph zone.

But eventually he pulled into a layby, where he was arrested and identified as Kieran Morgan, 18, unemployed, of no fixed address.

After being required to undergo a roadside test for alcohol and drugs, he replied:

His 17-year-old girlfriend was also in the vehicle at the time, and Morgan later told police he only stopped at the request of her mother, who was on the phone to her during the pursuit.

He was charged with dangerous driving, failing to stop when required by police and driving otherwise than in accordance with a licence.

He pleaded guilty to all three offences, and at Portsmouth Court on 19 April, Morgan was sentenced to six months’ imprisonment, suspended for 18 months.

He was also disqualified from driving for 12 months and must take an extended re-test should he wish to drive again, and is required to carry out 150 hours of unpaid work.

“Inexperience behind the wheel as a provisional licence holder, combined with a series of dangerous manoeuvres and excessive speed, is a lethal mix.

"Morgan created this dangerous environment for all road users, as well as himself, and it’s extremely fortunate this incident ended without tragedy.

“Morgan showed a clear disregard for his passenger and other road users that day, almost colliding head-on with other vehicles, forcing them to take evasive action.

“Collisions where fatal and life changing injuries occur is tragic for all those involved, from the family and the witnesses, to the emergency services responding.

"We are committed to reducing the number of avoidable collisions through our education and enforcement of the ‘fatal five’ offences – speeding, drink/drug-driving, mobile phone use, not wearing a seatbelt and careless driving.”